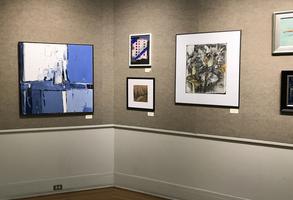 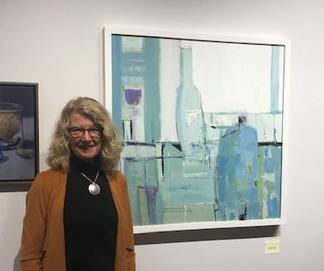 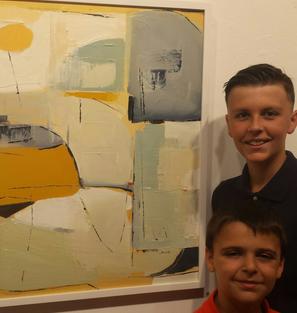 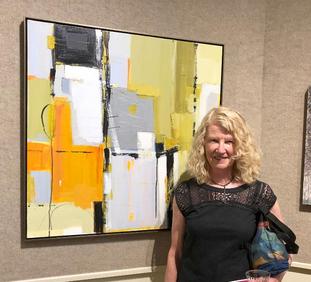 My canvases focus on colors, shapes, textures and moods---evolving as semi-abstracted figures, still lifes or non-representational art.   I am in continual dialogue with each piece, hanging the art on a wall to view and study and muse over for weeks, before returning to the easel, recreating.  Thoughtful brush strokes dominate my creation; spontaneous, intuitive strokes imbue its spirit.  Often, I begin a canvas by painting in shapes, objects, and lines---mindful of color and rhythm and composition.   Wallace Stevens wrote, "A work of art is never finished; it's abandoned."   I have many canvases that are revised or repainted completely---the original, abandoned.

"Montauk II" is one, beginning as a vertical, 40x30, in lavenders, greens, whites and oranges.  It hung on the wall for a year followed by another year stacked with other canvases in my studio, before I started repainting in cobalt mixed with permanent rose and white as well as cerulean mixed with aureoline and white---some of my favorite colors.   Textured lines in the canvas are a result of scraping wet over dry and wet over wet.   Underpainted oranges peeked through.   The vertical transformed to a 30x40 horizontal.

My intention as an artist is to create aesthetically pleasing and meaningful work through contemplation and experimentation.

At the Mystic Museum of Art 2020 Elected Artists and Members Exhbit, she received the Elected Artist Overall Excellence Award for her oil, "Black Raspberry and Greens."

2018 Lynn was selected as a finalist in the Greenwich-Westchester international Art Fair Competition.

2016 she had a solo exhibit at Alexey von Schlippe Gallery at the University of Connecticut, Avery Point Campus, Groton, Connecticut.

Lynn holds a Masters of Arts in Liberal Studies from Wesleyan University, Middletown, Connecticut and a Bachelor of Arts in English from Eastern Connecticut State University.   For most of her teaching career, she taught English at Robert E. Fitch High School, Groton, Connecticut integrating art and writing.

She lives with her husband in Noank, Connecticut.